Radical would be the best way to describe the body kit on Holden Special Vehicles interpretation of the V8 VN. Compared to the previous year’s SV88, the VL HSV turned into a ‘Euro-look’ executive express, the SV89 was a far more adventurous design, and with its deeply sculpted front and rear air dam/valance tray it was one of those cars whose styling you either loved or hated.

HSV was banking on 200 people loving it though, because that’s exactly how many of the white-on-white wonders they produced in 1989. That was a fairly exclusive little production run, but then HSV was guaranteeing the quality and performance of every car and all for an initial asking price of around $44,000.

Made out of fibreglass, the body kit consisted of six pieces all of which gelled nicely with the VN Commodore’s swoopy lines. The front spoiler and rear valance panel were in fact integral with the front and rear bumpers while the other pieces attached directly to the body. Besides blending in to the arches and tying together the ventilated ‘glass fore and aft the side skirts give that all important lower visual profile, while the boot-lid spoiler (described in the HSV brochure as subtle – about the only bit of the kit that was!) went the other way, raising the height of the tail and letting everyone know this was something out of the average. And yes, in line with TWR policy the kit had been wind tunnel tested, albeit in the form of a scale model at RMIT, and no, HSV did not quote Cd figures except to say that it is better than the standard car.

Aerodynamics wasn’t the only area where the SV89 had an edge over other V8 Commodores though, subtle mods had seen to it that there was a bit more under the bonnet too. Fifteen kilowatts and an equal number of Newton metres more to be precise, an increase from 165kW at 4400rpm, with 385Nm at 3600rpm, to 180Kw at 4600rpm and 400Nm at 3800rpm. Extracting an extra seven per cent more power from as healthy an engine as the fuel-injected five-litre wasn’t too hard a task by any standards, but when you had ADRs and warranty to think about it was wise not to go too far over the top.

By late 1980s standards the driver of the SV89 was in for a pretty plush time as the stock trim was ditched in favor of a Mulberry leather/velour combination and a colour-keyed Momo wheel and shifter knob. Other goodies built into the SV89 included Calais head lining, sun visor, boot trim, and instrumentation complete with GM-H’s excellent trip computer, central locking, power windows, cruise control, power exterior mirrors and an uprated sound system courtesy of Sansui.

With the SV89 HSV followed much the same path taken with the SV3800, namely bolting on a set of extractors, backing them up with a dual exhaust system, and recalibrating the engine management system. Just for safety’s sake the HSV engineers added the knock sensor from the Group A engine (never know when you might get some ‘bad’ gas) and, to help the inlet side of the operation keep gasses flowing, whipped up a special air-cleaner assembly that is both larger and better positioned to catch cool air.

Transmitting the modified V8’s not unimpressive power towards the SV89’s limited slip differential and hence to the ground was your choice of either five-speed manual or four-speed automatic transmission. The stick shift was standard, but the self-shifter ran a new valve body recalibrated to suit the higher power/torque peaks and provided a bit more transmission pressure for faster shifts. That was a good thing because in standard form the V8 VN auto was a very ‘lazy’ little unit and hardly suited to a performance application like this one. A set of the, by 1989 then familiar, special HSV pattern 16 x 7-inch wheels shod with 205/55 x 16 Pirellis were the final link in transmitting the torque to the tarmac, but to make sure the SV89 could handle corners as well as it burned up the road the suspension had come in for a bit of a rework too. Holden’s excellent FE2 pack, with its stiffer bushes and more powerful brakes, formed the basis of the SV89’s suspension but there were further changes still.

Up front a set of progressive rate springs lowered the car to the minimum ride height allowed by ADRs, while bump and roll was controlled by a set of gas shocks carried over from the SV3800 and a thicker diameter sway bar. At the rear standard FE2 springs combined with a set of specially calibrated gas shocks, keeping things under control with the help of a reworked Panhard rod angled, not for trick geometry, but to clear the dual exhaust system. The other suspension mod, and according a press release at the time by John Harvey, one of HSV’s most significant changes was the use of modified top mountings on the front struts – these, Harvey claimed, improved ride quality and reduce impact harshness. 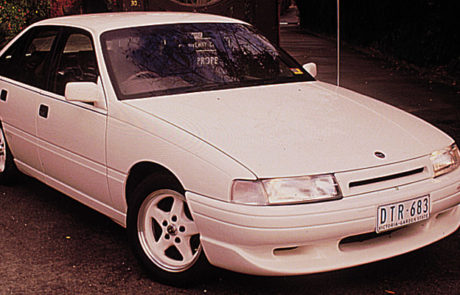 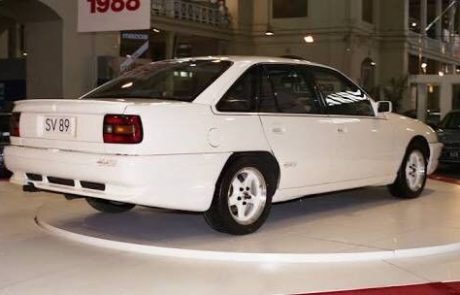