The start of a generation… Bred to win races

Best known for the polarising body kit and bluish-silver colour, the VL Group A SS was also the first model to feature a fuel-injected version of the Holden V8, with the first electronic fuel injection (EFI) VN Holden Commodore V8s not released until August 1988.

The SS Group A SV was produced in 1988 and was only available in one colour, Panorama Silver (named after the renowned Australian Mount Panorama Circuit). It was assembled at Dandenong, Victoria (Holden) and modified at Clayton, Victoria (HSV).

The car carried Holden badges because of Group A racing homologation regulations, which necessitated at least 500 road-going versions to be sold to the public.
TWR developed the famous Walkinshaw bodykit that was stated to reduce drag by more than 25% over the previous Holden Dealer Team SS Group A. Due to its high use of plastic in the bodykit, it was nicknamed the “Plastic Pig” and “Batmobile”. Other, less derogatory nicknames included the “Walkinshaw” and the most common of all, “Walky” (after TWR’s chief Tom Walkinshaw).

The Group A SV was made as a limited run of 500 from March to November 1988, but HSV subsequently decided to make 250 more units to meet demand. However, these were slow to sell with some examples having their appearance modified by dealers in an effort to get them out of the showrooms and others sold years after their launch. Slow sales were also impacted by Holden releasing the new generation VN-series Commodore in August 1988, though a new Group A homologation special (the VN Commodore SS Group A) would follow only in 1990.

The engine, although rated at five litres and 180 kW (241 hp), was specially made to withstand racing conditions. The block was specially cast and crankcase was fitted with four bolt main bearing caps. The heads were revised with high-flow intake ports and roller rockers. Special connecting rods, crankshafts, and pistons were fitted as well as a custom exhaust. The key feature though was the fabled Walkinshaw twin throttle body inlet manifold, which had been specially developed for the Group A and featured sequential setup with a smaller and larger throttle body. This was fitted with a restrictor plate on the larger, secondary throttle body, which actually let less air through than the smaller throttle body. Some reports have indicated that as much as 50–60 horsepower can be gained from the removal of the restrictor plates. 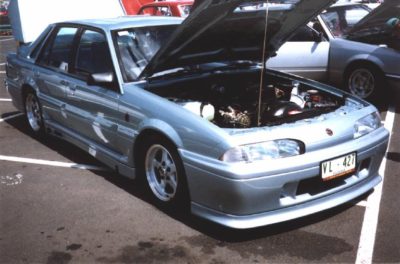 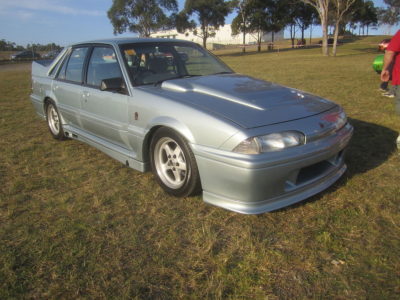 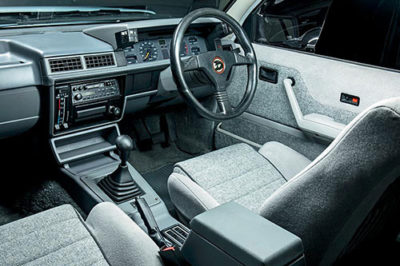 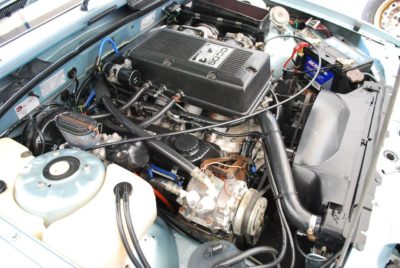 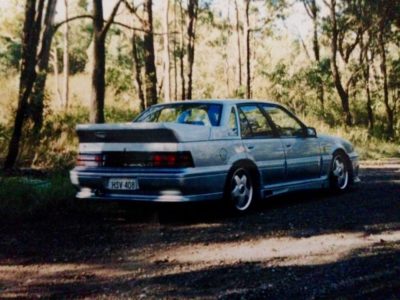 The Holden VL Commodore SS Group A SV driven to victory in the 1990 Tooheys 1000 by Win Percy and Allan Grice The Group A SV, according to reports, should have made its track debut early in the 1988 ATCC. However, due to the split between Holden and Peter Brock in 1987, the car was severely delayed in the change from HDT to HSV. Instead the car made its world racing debut on 21st August at Brands Hatch in the hands of Mike O’Brien, scoring a 13th place in the 10th round of the 1988 British Touring Car Championship. Its Australian racing debut occurred on 28 August at Oran Park, driven by Garry Willmington in the 1988 Pepsi 250, with Willmington failing to finish.

HSV owner Tom Walkinshaw and his longtime TWR driver Jeff Allam drove a TWR entered SV in the 1988 RAC Tourist Trophy race at Silverstone on 4 September, finishing 15th. The car proved itself quick but not up to the speed of the Ford Sierra RS500’s. Walkinshaw found the Commodore’s performance level to be about the same as the factory Nissan Skyline GTS-R’s. TWR also raced the SV at the 1988 Tooheys 1000 in a joint effort with the Perkins run (but TWR owned) HSV Team. The car was retired after just 5 laps with rear suspension failure. Walkinshaw himself was cross-entered in the Perkins/Denny Hulme car for the race. That car was retired from 2nd place after 137 laps with engine failure, a rare thing for a Perkins built engine. This was also the last time Tom Walkinshaw raced as the 1984 European Touring Car Champion retired from driving after the event. The best result for the new VL in its first year was when Perkins and Holden Special Vehicles team mate Denny Hulme scored a 1–2 result in the Group A support race at the 1988 Australian Grand Prix. The pair had earlier finished second at the 1988 Enzed 500 in the factory teams debut of the new car, while their team mates for the race (in Perkin’s updated ATCC VL), Armin Hahne and Jeff Allam retired after 56 laps of the 129 lap race.

Wins and even placings were hard to come by for the cars in Australian Touring Car racing during 1989 and 1990 as they were up against the lighter and more powerful turbocharged Ford Sierra RS500’s and Nissan Skyline GTS-R’s. The factory backed Holden Racing Team was hardly seen other than at the major endurance races at Sandown and Bathurst and it was left to the privateers to fly the flag for Holden. At the Sandown 500, Perkins teamed with Win Percy to finish 2nd behind the Skyline of Jim Richards and Mark Skaife. At the 1989 Tooheys 1000, the fastest Holden was the Holden Racing Team VL of Perkins and defending race winner Tomas Mezera who qualified 11th, some 3 seconds off the pace. This meant that for the first time since it was introduced in 1978 no Holden qualified for the pole shootout. In the race the two HRT cars of Perkins/Mezera and Percy/Neil Crompton finished 6th and 7th respectively and were the first Commodore’s to finish, 3 laps down on the winning Dick Johnson/John Bowe Sierra.

Fortunes for the car turned around with a surprise win in the 1990 Tooheys 1000 by Win Percy and local hero Allan Grice driving for the Holden Racing Team (the winning car was in fact the same car that failed under team owner Walkinshaw during the 1988 race). This was followed by a win in the 1990 Nissan Sydney 500 at Eastern Creek Raceway by Perkins and Tomas Mezera in Perkins privately entered car.
The car was replaced for 1991 by the Holden VN Commodore SS Group A but made a comeback of sorts in 1992 again campaigned by Perkins who reverted to the VL model once more, winning the 1992 Sandown 500 before going on to start on the front row at Bathurst. The Sandown event was the last major win for the VL SS Group A SV.

For 1993 the VL was abandoned by the major teams in Australia as that year saw the start of what is today’s V8 Supercars. The car was still used by the majority of the privateer teams up until the end of the 1995 Australian Touring Car season.